I have problem using google OAuth2 with django: GSI_LOGGER]: The given origin is not allowed for the given client ID

I have an issue with @react-oauth/google npm package. When I using react app on port 3000 and backend django on port 8000 every thing work's, but after I build react app and using port 8000, I try to log in via google, I get that Erros:

Failed to load resource: the server responded with a status of 400 m=credential_button_library:45 [GSI_LOGGER]: The given origin is not allowed for the given client ID. I did double check on 'Authorised JavaScript origins' and 'Authorised redirect URIs' (image attached) but the giving origin are allowed, so whats can be the problem?

I read about similar problems here on the site and also tried CHAT GPT but nothing helped. This is my configurations: 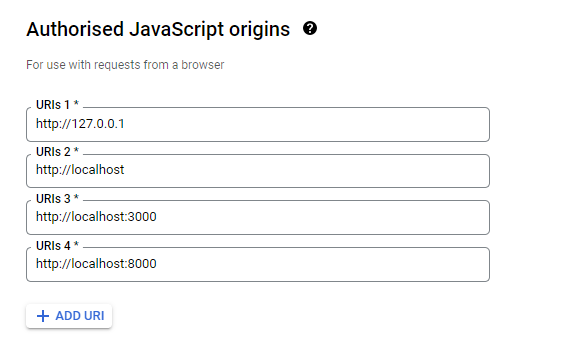 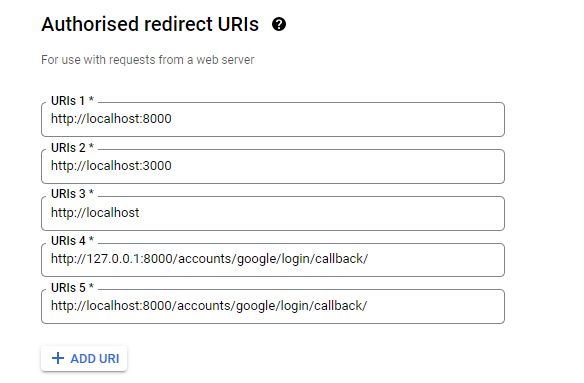 Django: Count forloop.first only if a second if condition is met

Django queryset to list of ids with integer values

celery 'function' object has no attribute 'delay' how to get return value after delay?

Why my "friends_list" remains empty when my Django signal is triggered?

django.db.utils.OperationalError: could not connect to server: Connection refused Ubuntu

Recommended entries on the topic

Python 3.11: Cool New Features for You to Try

The Ultimate Guide To Sets In Python

Class-based vs Function-based Views in Django

Parallelism, Concurrency, and AsyncIO in Python - by example